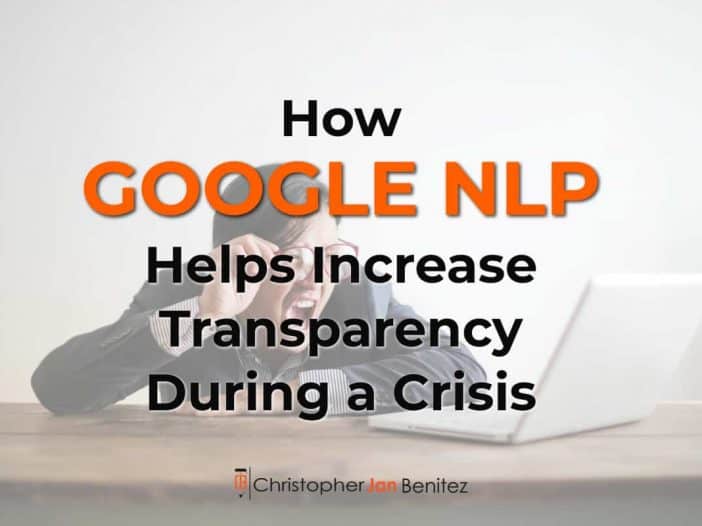 ‘Let me be clear’ – how many times in the last two months have we heard those words from our politicians?  Now, more than ever before, the need for clear and transparent communication is at the forefront of most of our minds.

As governments become divided and we face immeasurable loss, the way forward seems uncertain and, as is the case more and more frequently, we turn to technology for the answer; specifically, natural language processing.

Natural language processing (or NLP) has been used for some time to help resolve business crises and, now, it’s being used to help battle the very real crisis of COVID-19.

NLP harnesses the power of artificial intelligence (AI) to recognise and understand human language in both text or speech.  NLP works by converting this language into one that a computer can understand and then analyses it to form an understanding of the context.

People use Google NLP for years to power things like spell check tools and online searches and it’s getting cleverer all the time.

Natural language processing is broken down into:

How do we use NLP?

Apart from the few examples I’ve mentioned, natural language processing is used in a huge number of ways in our everyday lives.

Business Crises And The Power Of Google NLP

At one time or another, most businesses face some form of crisis.  Whether it’s a defective product or being caught out on tax issues, a crisis can spell the end for a company if it’s not managed correctly and quickly.

One of the most effective ways of tackling a crisis is to find out just what it is that customers and potential customers are saying – and this is where sentiment analysis comes in.

Sentiment analysis tools trawl the internet to find mentions of a brand, product or service and then analyse those mentions to sort them into one of three categories – positive, neutral and negative.

Most tools also allow users to view individual comments to drill deeper into the matter.  By knowing what’s being said, a business can then tailor their public response accordingly.  This has been used to great effect by many businesses and organisations, for example:

This became clear this week when Twitter’s sentiment analysis highlighted staff concerns regarding a return to the office because of the lifting of some coronavirus restrictions.

Twitter’s response was immediate and positive as it announced that its staff are permitted to continue working from home ‘forever’; instantly gaining itself some great PR as well as alleviating the fears of its employees.

In 2018, the popular chicken chain suffered an embarrassing #chickencrisis when it experienced a blip in its supply chain; an embarrassment which could have swiftly ended its business.  Instead, KFC used sentiment analysis to get a feel for the public opinion and, by doing so, was able to come back with an apology and an amusing campaign which brought customers flooding back to its restaurants.

And being used by businesses and governments, sentiment analysis is also often used as a weapon.

Critics of British Prime Minister, Boris Johnson, are known for using this tool to point out the PM’s perceived shortfalls.

For example, in an analysis by Wordnerds, it was revealed – through the use of NLP – that, in a Brexit speech on the 25th of September 2019, one in 28 words used by the Prime Minister were deemed to be hostile or aggressive, thus, the entire speech was classified as negative.

Similarly, and also in 2019, Johnson was caught out by sentiment analysis which revealed that his claim that ‘most people support me’ was blatantly untrue.

Although not a crisis, a real frustration for many businesses is a lack of new leads and the fact that they’re not getting the conversions that they would hope for.

For some businesses, the problem is often very simple but, without knowing the reasons why, they’re effectively operating blind.  One of the most common problems faced by businesses is that their landing page isn’t converting visitors to customers.

Your results will probably include people talking about a broken link, an irrelevant landing page or a technical problem which made them give up.

For a business, this information is a valuable currency which can be spent on fixing the problem – and letting people know that it’s fixed.

Landing new customers does, of course, lead us onto the all important matter of SEO (search engine optimisation) and, yep you’ve guessed it, NLP can help with that too.

By now, we’re all more than aware of how vital SEO is in keeping a business visible and viable and NLP is changing this in a hasty manner.

As serious as a business crisis is, it pales compared to the devastating worldwide crisis caused by COVID-19.  This is, however, another area in which natural language processing has been used to help.

The world of retail, manufacturing and online shopping has been hit hard by the current crisis and many businesses have halted their normal operations to use their premises and equipment for the greater good.

One such business is Alibaba’s https://damo.alibaba.com/ which is dedicated to exploring the unknown with the help of technology.  The company has recently deployed its StructBERT NLP model to help the coronavirus cause.

Similarly, the White House has now released over 29,000 scholarly articles about the coronavirus family to organisations including the Allen Institute for AI in order for NLP experts to analyse the data to make their findings known.

How does NLP tackle a crisis?

Natural language processing can do this in several ways:

The first stage of using NLP in a crisis is to put the crisis into context.  For example, did the issue make people angry or sad?  It also helps to pinpoint the moment at which the problem materialised by highlighting the point at which a downward trend in the sentiment began.

By understanding where the issue started and why people feel a certain way about it, you can understand what kind of response is required from you.

Although the overall sentiment may be negative, that doesn’t mean that there aren’t some positives.

By analysing the comments in your sentiment analysis results, you can pick out those who are actively supporting or defending you and your brand and, subsequently, identify these people as brand advocates.

The above two steps allow you to see where the problem started, how people feel about it and who you can rely on to support you.  From here, you’re in a really strong position to make some changes.

For example, you identified the fact that, for the past month, people have been angry about the fact that they can never get through to your customer support.  “Armed with this information, you can improve your business in this area (maybe by hiring more staff) and set new processes in place” says  Max Babych, CEO at SpdLoad.

Once you’ve made these changes, you can enlist your new brand advocates to help you spread the word about the improvements that have been made.  From here, it’s a good idea to run sentiment analysis every month to monitor how the sentiment toward your brand or product is changing for the better.

Whilst natural language processing can be invaluable during a crisis, it can also manage the aftermath and to prevent further crises.

The security industry has been using NLP and machine learning including improvements in finance and banking, home and business premises security.

Most, AI and machine learning were used by a Toronto startup, BlueDot, to develop a warning system which would identify the risk of COVID-19.  The system continuously scans 100,000 mass media and official sources in over 65 languages to detect outbreaks in real time.

On 31st of December 2019, BlueDot’s system alerted a BlueDot employee to a potential outbreak in China’s Hubei province.  As we’ve seen over the last couple of months, this kind of technology will be vital in saving lives and economies worldwide soon.

Stanford University in the USA are working on artificial intelligence based methods of managing a huge intake of COVID-19 patients.  The team is exploring using machine learning to identify those patients with conditions that can be prevented from getting worse by receiving intensive care.

The technology, which will be available in 2020, enhance decisions made by doctors and clinicians.

For new and emerging technologies, there can be none more important than natural language processing.  Although the technology is not, as yet, 100% infallible, experts are working constantly to make improvements to recognise nuances and localisms.

As we look to the future, our current usage of NLP will seem miniscule.  And aside from improving our businesses, streamlining our services and improving our security, natural language processing and machine learning will also save lives.

Already, the medical industry is taking advantage of this technology to improve on diagnoses and treatments.

Google’s DeepMind Health has been used for some time now in the field of neuroscience.  The system uses machine learning to develop algorithms which aim to mimic the working of the human brain.

Following the devastating outbreak of COVID-19, BlueDot has proven that the tech can identify and predict outbreaks of disease.

It, therefore, stands to reason that NLP is something that not just countries but companies should invest in to the full extent of their power.

Throughout his career, Milosz has been consulting and devising growth tactics for small businesses and start-ups, particularly within financial services. Prior to the acquisition of Chilli Fruit Web Consulting, Milosz has been involved in growing Plus Guidance (an early-stage UK tech start-up, now acquired) and Sigma Digital Marketing Agency based in Oxfordshire.

Content marketer during the day. Heavy sleeper at night. Dreams of non-existent brass rings. Writer by trade. Pro wrestling fan by choice (It's still real to me, damnit!). Family man all the time. Hire me to write your content! Read More…

The above intro has been made using InVideo.io

In my post, you will see links tagged with an asterisk (*), the phrase “affiliate links” enclosed in parentheses. Whenever you click on these links and sign up or purchase the tool successfully, I will receive a commission. This also applies to links in all the posts under the Review category of my blog.

Therefore, if you like the post and want to use the featured affiliate products, please purchase them from my link. It would mean a lot to me!